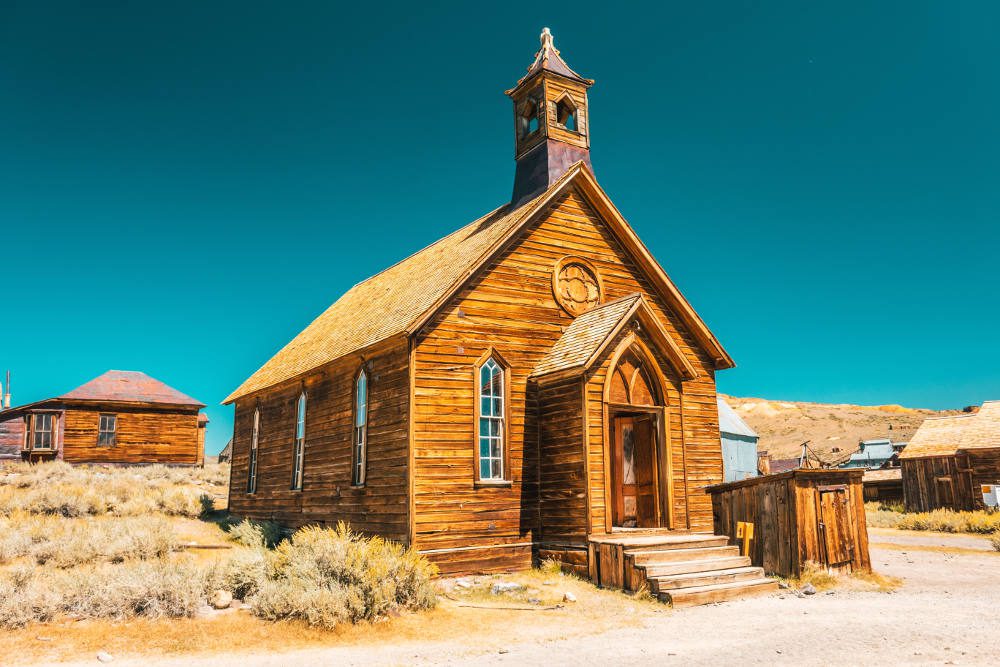 The Real Ghost Town without a Souvenir Shop

The Real Ghost Town without a Souvenir Shop

Back in 2012 when I was in Mexico, I was surfing the internet looking for an adventure in the U.S. I came across a ghost town in California called Bodie. It had a huge fascination for me because it appeared as if everyone just put on their coat and hat and walked away.

We traveled from Death Valley at 284 ft below sea level to 8,400 ft. and the fuel gauge plummeted as we climbed into the mountains. After a stay in an empty RV park in Bridgeport Calif., we headed up the mountain to Bodie which was about half an hour to the south.

You come around the corner on the rough gravel road and there it is. The whole town is laid out in a valley. It looks like Wyatt Earp and his brothers are going to appear from one of the buildings in this 1800’s town any minute.

The shelves in the stores are still stocked. The furniture in many houses still there, windows unbroken, and the bar still has a pool table with balls and ques. Mining machinery is everywhere and so are some old cars, trucks and buggies.

Bodie was designated as a California State Park in 1962 and they describe it as “in a state of arrested decay”. In other words they keep the roofs from leaking but don’t do major restoration or rebuilding. Many structures appear as they would if man just disappeared. Thankfully, there are full time park employees that live in Bodie to prevent souvenir hunters and vandalism. Only about 5 % of the buildings of Bodie remain today due to the elements and a major fire long ago.

HISTORY
Bodie was a big mining community high up in the Sierra Nevada range at about 8400 ft. and was established about 1859 after Waterman S. Bodie discovered gold there. In 1879 the population was about 10,000 people and was second to none for wickedness, bad men and “the worst climate out of doors”. The weather here is severe due to the elevation and snowfall can reach 20 ft. deep with sudden storms arriving without warning.
There is an account of one little girl whose family was taking her to the infamous town, who wrote in her diary, “Goodbye God, I’m going to Bodie”. The phrase came to be known throughout the west.

Killings became common and were almost daily events. Robberies, stage hold ups and street fights provided variety and the towns 65 saloons offered many opportunities for relaxation after hard days of work at the mines.

While we were visiting Bodie one of the rangers answered a question of mine. I asked “how was this town preserved without theft and vandalism”. She told me one of the town’s settlers, the Cain family, became very successful and stayed in Bodie even after the gold rush was over.

They bought up houses as people left and eventually acquired the whole town. When the Cain’s left, they hired a caretaker to protect the town and all the contents of the buildings. The ranger told us she has met people who have come to visit and tell of being there as youngsters. They said an old guy with a shotgun would meet you and tell you “you can look around but don’t touch anything” and then he would follow you through the town. Thanks to the foresight of that family and California Parks, Bodie is well preserved for all to enjoy today.

One of our friends Linda, commented on our blog saying “living the dream” and in fact we are. I feel so lucky to be able to fulfill some of the dreams I have had for years about visiting places like Valley of the Gods, Antelope Canyon and my favorite, Bodie California. I hope everyone has a “bucket list” of places or things they want to see and do. Life is so much more exciting with things to look forward to and so rewarding when you accomplish your goals. Don’t wait for that so called “some day”. Dream big and make it happen.

This concludes our adventures for this winter and we are now back at home on Vancouver Island. Thank you for coming along and don’t forget your belongings when you leave the theater.

You may also consider the following articles and links:

Would you want to sail away from this surreal worl

Read all about it! “The Power Match of the Activ

Power Breakfast to start the day. What’s your fa